Bullying behaviour is a complex issue and research in the area does not identify the supremacy of any one cause of bullying. Below is a summary overview of key factors that are considered to contribute in various ways, to the likelihood of bullying behaviours. The information below is not a complete list of all factors. They do represent major categories of focus with examples of predominant factors of influence within each.

Dysfunctional families – Children who bully are 3 times more likely to have family or parental problems (Stephenson and Smith, 1989). Children who have positive relationships with their parents are less likely to bully (Rigby, 1993; Bowers et al.; 1992).

The bully’s own predisposition. Children who bullied have been reported as being low in empathy and therefore not being sensitive to the plight of others (Enderesen and Olweus, 2001; Menesini et al.; 1997). Students themselves gave the following reasons for bullying (Rigby, 2008):

Rigby (2004) puts forth a number of different theoretical explanations as to the potential cause of the bullying behaviour. A summary of these ideas are presented below in a diagram and accompanied explanation of each factor presented in the diagram. 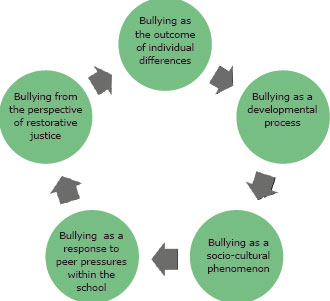 Bullying as the outcome of individual differences

This approach suggests bullying results from the differing level of personal power between each student. These differences are either physically or psychologically based.

Bullying as a developmental process

This approach is based on the belief that there is a natural instinct to dominate, in terms of social dominance, to ensure survival of the species. Initially children engage in more physically direct means of bullying but as they progress developmentally, they adopt less socially offensive means of bullying by replacing them with more indirect means (Rigby, 1997).

This perspective leads schools to adopt programs that positively foster the developmental growth of students and challenges schools to address the subtle changes in bullying as students mature.

Bullying as a socio-cultural phenomenon

This approach takes a broader societal perspective when identifying the cause of bullying behaviour. Bullying is seen as a consequence of the power differential between various social groups in our society based on gender, race, social class, etc.

School programs adopting this perspective develop programs that address prejudice and discrimination and attempt to increase the cultural sensitivity by introducing a collective and cooperative approach. The Australian web site www.bullyingnoway.com.au operates from this perspective.

Bullying as a response to peer pressures within the school

This perspective sees bullying as a group phenomena. Groups are not necessarily tied to race, gender, etc. but exist through a common interest or purpose. Within a school environment, the peer group will often bully another group or individual for a reason (real or imagined) or simply just to have fun.

Bullying from the perspective of restorative justice

This approach takes an individualistic view of the bully and sees bullying behaviour as a result of the specific and unique psychological and emotional characteristics of the bully. It views bullies as not being able to self regulate with feelings of shame.

Bullies are considered not to have pride in their school nor integrate well into their community (Morrison, 2002). Programs based on this approach believe the school community and significant others should support the bullies as they are provided with opportunity to expose their wrongdoing in a caring environment not a punitive environment. The primary aim is to restore positive relationships among the bully and victim and the whole community.